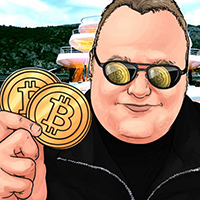 Kim Dotcom is a German-Finnish entrepreneur, founder of the large. now-defunct file hosting service Megaupload. Currently, Dotcom owns Mega web-service that was founded a year after the closure of Megaupload. In 2012, Kim Dotcom was arrested on suspicion of extortion, money laundering and mass infringement of copyright, with access to Megaupload being blocked due to the possibility of sharing counterfeit materials. He was released on bail. Currently, Mega is one of the largest online file storage providers that accepts Bitcoin and some other kinds of cryptocurrency as a payment option. Kim Dotcom’s net worth was estimated to be over $200 million in 2012, however, is current net worth is unknown. In 2017, a film based on biographical events called “Kim Dotcom: Caught in the Web” was released.
CT empfiehlt
Cointelegraph YouTube Abonnieren
Werben